Recently, I talked about the importance of mentors in my career and the journey that’s brought me here to Factor. Mentors don’t need to be appointed or overly formalized relationships but often can be individuals that you admire and respect. They can be candid and open to helping you solve the big problems in your career and even at home.

The following conversation took place with Mike Bryant, partner at Knox Capital Holdings, who over the last 10 years, has been a friend, a colleague, and a mentor to me. We talked about the past and the future, about how this incredibly helpful dynamic formed, and about what we (and hopefully many others!) can learn from it. I’m posting the conversation here because these are topics I’m passionate about.

Varun, when did you know that Mike was your mentor? Did you have “the talk?”

Varun: With us, there wasn’t a “will you be my mentor” proposal or anything. I started to notice when there were big problems I was trying to solve, Mike was frequently on the short list of people I would call. There was a pattern to our conversations - open ended philosophical questions evolving into specific opinions, challenges, and decisions.

Mike, when did you know that Varun was someone you wanted to invest your time in?

Mike: I've spent a lot of time establishing and growing early stage companies. It's not always pretty and you learn to value Swiss Army knife type professionals. I saw Varun exhibit this different way of thinking in a startup which was chaotic as most are. I appreciated that he was willing to roll up his sleeves on everything we knew we needed to do, and things that hadn't even crossed our mind yet!

“I always think about it like a chess game. It’s not only about this move, but about the few big things you want to do in your career. Work backwards from those and make the move you need to make today to get there.”

Varun, what’s one lesson you learned from Mike that you often think about?

Varun: Take the meeting. If someone wants to meet with you, meet with them. Help them if you can. If you benefit in some way from helping them, great. If not, you’re putting out good karma into the world. Mike showed me how much you grow if you take these meetings as an opportunity to learn. He’s doing it right now - he’s got three deals in the works but he’s making time for this conversation today.

Mike: I try to convince Varun that I’ve added more value to him than he’s added to me but I don’t think that’s true. That’s what this type of relationship is all about. Mentors and mentees can switch roles. There are times I called Varun looking for advice. There’s gotta be a two way street there. 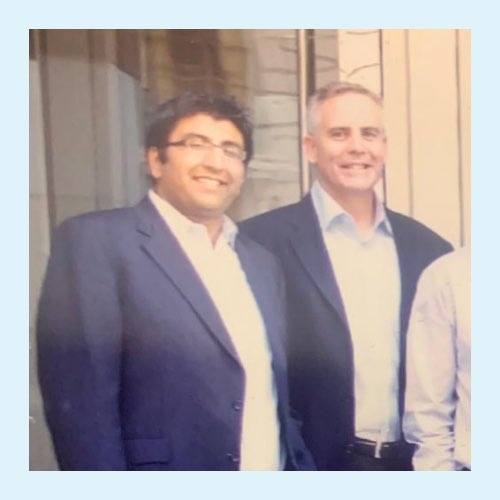 Our first time working together building an executive retreat in 2008.

Varun: He breaks it down to the operational question of “what do I do today?” and the strategic question of “why does what I do today matter?” Then he tries to get into my head and gives me some guidance on how to think about it. This really works for me. I don't want vague fortune cookie advice, and I also don’t want to be told what to do. Mike strikes a balance between the two by guiding me on a decision-making journey.

Mike, as a mentor, what’s your philosophy on giving advice?

Mike: I believe when someone comes to me for advice, most of the time the answer already exists within that individual. It’s about asking the right questions hopefully along the way you guide the person toward what they feel is the right answer. Varun, I remember when you were evaluating the decision to jump into Factor. I always think about it like a chess game. It’s not only about this move, but about the few big things you want to do in your career. Work backwards from those and make the move you need to make today to get there.

Varun: I remember those discussions. Mike didn’t tell me what to do, he gave me a way to think about it. He wanted me to get to the decision on my own. Having said that, there have been times when I just needed to get out of my own way, and thankfully Mike has told me that!

Mike: Varun does a nice job of polling a few people and then sharing amongst the mentors what the feedback is. That’s smart because with any big decision, whether it’s a relationship decision or a purchase decision or a professional decision, getting various perspectives is good. It means you’re going to have better data.

What types of mentors should people seek out?

Mike: You don’t want a replica of yourself. You want to seek out different ideas and styles and talents. I tend to align with younger, technology-oriented, creative talent. I didn’t get my first laptop until I was out of college. I didn’t have a mobile device growing up. My first device was a Palm Pilot which is in the Smithsonian Institute right now. I have had to work hard to learn and stay current with emerging tech. Varun, on the other hand, is more intuitively fluent on this front. Well, maybe not the Palm Pilot, which is just another indicator of how quickly the world changes. Mentoring the younger generation is also a way for me to keep learning about how business is evolving.

What are the practical ways you’ve both continued learning throughout your career?

Varun: By going through it. Mike gave me great advice when I was struggling with whether to stay or leave a previous company that was going through leadership challenges. He said if it turns around, I’d be a part of that accomplishment. If the whole thing crashes, I’d better know how to avoid that in my future. Both of those ended up being true in many ways. It was better than getting an MBA - it was real. Now sometimes when making a decision, I’ll think back to that time, and I do the opposite of what I saw leaders I had worked for do. Many of the insights that have helped lift me to the little success I've had are results of poor decision making and leadership I've experienced in the past and how I felt.

Mike: As I was deciding to enter the world of private equity, there were a couple of people that I spent quite a bit of time with. One was a friend who was my next door neighbor. He was the founder of a big private equity fund in Connecticut. I asked him if I could come to work with him as a field trip. I wanted to hang around the office and see how he structured deals. He was willing to do it and it was eye opening to see an expert do his work. So, I had an interest, I thought about who I could learn from, and I asked them if I could. The first step is knowing your needs and goals.

What advice would you give to people who are just at the beginning of building their network of mentors, especially with the new normal of corporate life, which is right now mostly from home?

"If you’re looking for a mentor, don’t be reserved about asking someone that you respect and think you could learn from. Typically they’re going to opt in."

How should people who are established in their careers think about taking on mentees?

Mike: I still do talk to and meet with a wide variety of people. Sometimes I’d much rather end my day without taking that call with a friend of a friend of a friend. But oftentimes those meetings turn out to be additive down the line. I’ve had to become a bit more selective, but being open minded to meeting new people and having conversations is really important to me. Even participating in some of the organized events - there is usually one person or one topic that is going to spur some new thinking. Being engaged in thought leadership is really important.

Varun: Once people become successful, some operate from a lens of “I know everything.” What Mike has taught me is that he doesn’t know everything. Part of the learning process is knowing when you don’t know things and being able to go out there and find the information you need. Acting as a mentor is another practical way that people more established in their career can continue to learn.

How do you view the meaning of mentorship at this point in your careers?

Mike: As you evolve, it becomes less important where you work and what you’re doing and more important as to who you’re doing it with. If you're lucky enough to catch lighting in a bottle and get the market opportunity, the platform, and the team dynamics all aligned once or twice in your career, you’re really fortunate. If you do pull it off, you tend to want to work with those people again. The more I’ve advanced in my career, the more grateful I am for getting the people part of it right.

Further Reading
INSIGHTS
Street Performer to Orchestra Conductor: Lessons in Leadership
December 1, 2020
This year, my first as CEO, I've found it's more about slowing down than being a quick mover, about chasing empathy over wins. As I look back and reflect, here are a few things I found helpful and learned about leadership along the way.
READ MORE
INSIGHTS
No magic to building great culture…hint, it starts before they start
October 22, 2020
You walk from the elevator to the door, wiping the sweat from your palms onto your chinos. You slide your hand inside your bag to make sure your resume is there, a gesture you’ve done about 45 times since you left the house. Okay, it’s time. Wait, smooth your shirt down first. It’s doing that weird foldy thing again. Why did you wear this shirt? It always does the foldy thing.
READ MORE
BACK TO TOP